Science-based targets help business align sustainability ambitions with society’s environmental goals. More than that, they are a way to turn globally agreed goals into achievable and proportional targets for businesses and cities – and provide a clear route to reduce environmental impacts.

Science-based targets (SBTs) are a framework and a process for businesses to align their individual sustainability actions with globally agreed environmental goals.

The best-known SBTs are for climate. Over 900 forward-thinking businesses have already committed to taking science-based climate action in line with the Paris Agreement, which aims to stabilise the Earth’s warming to 1.5°C above pre-industrial levels. Partly due to this success, SBTs are now being developed for environmental issues that go beyond climate.

SBTs translate and downscale global goals meaning companies can set measurable, achievable, and fair targets – disaggregating ‘how much is enough’ from a global level (e.g. 1.5°C) into proportional, company-specific targets that contribute to achieving that shared global goal.

SBTs mean that we can take collective and effective action to tackle the nature crisis we face and keep human activity within the boundaries of a safe operating space. ​

Crossing these boundaries, for example through climate change, species extinction or by destroying or degrading ecosystems, increases the risk of causing a state of environmental damage from which we are unable to recover – and that will come with significant impacts for humanity.

The overarching global goals for nature will be designed to keep us within planetary boundaries. They are expected to be agreed through the Convention on Biological Diversity (CBD) process for target setting in the new decade. The post-2020 global framework provides an outcome-oriented framework for the development of national – or regional – goals and targets. The current CBD draft goals highlight three key dimensions of biodiversity:

SBTs for nature go beyond climate action to provide systematic solutions to reduce the risk of nature loss across four key areas – freshwater, biodiversity, land, and oceans. These new SBTs are being developed by the Science Based Targets Network – a large consortium of organisations along with the same founder organisations as the Science Based Targets Initiative for climate (WWF, UN Global Compact, WRI and CDP).

Unlike SBTs for climate, which are measured in standard units of carbon and are applicable globally, there is no single unit of measurement for SBTs for nature, as nature is geographically diverse and locally complex.

Within the SBTN, the biodiversity hub is currently developing SBTs for biodiversity. We are co-leading this hub, alongside UNEP WCMC and IUCN to bring both ecological and industry perspectives and ensure the correct balance of pragmatism and rigour in the development of new targets for biodiversity.

Getting ready for action

The AR3T framework (Avoid, Reduce, Restore & Regenerate, Transform) is a series of steps designed to guide the actions of companies and cities in line with the best available environmental science. Building on the mitigation hierarchy, the preventive and remedial steps will be familiar for many, while adding a step focused on the transformational change needed to rebalance our relationship with nature.

While SBTs for nature are at a developmental stage, it’s not too early to start aligning sustainability actions with upcoming global goals and policy, and there are steps that can be taken now. The work of the Science-Based Targets Initiative has already proven the approach works in enabling companies to address their own greenhouse gas emissions.

Go to the SBTN to find out more or register your interest in joining. http://sciencebasedtargetsnetwork.org/get-started.html

If you are interested in exploring what science-based targets can do for you, do get in touch with us. We can help you get started on your journey by:

How can we help?

How can we help your organisation meet its biodiversity and nature goals? 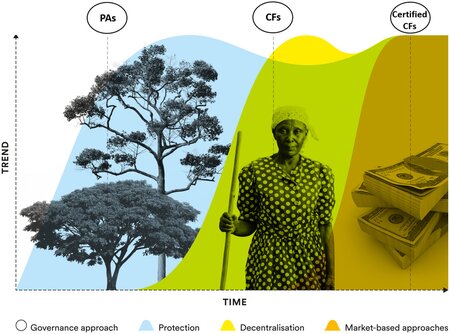 Protected Areas (PAs) are often the first tool in the conservationist’s tool kit for preserving biodiversity, but they are not always effective. As a result, PA management has undergone a major rethink in recent years.